Satellite reception using an existing terrestrial cable network? Now it is possible:
POLYTRON, the well known specialist for headend applications, is launching a new, and so far unique, solution called Polyselect TST1200 for the reception of digital satellite television with its large diversity of TV channels, including HDTV and PayTV, over existing cable infrastructure. Furthermore, neither cables nor amplifiers nor antenna sockets have to be replaced and the installation could be adapted with nearly no effort in a very short time.
Compared to other solutions the number of subscribers is not limited for example to 8 or 12. Engineering and production of this innovative solution from POLYTRON is “made in Germany”.

TST 1200 is the first signal converter on the market which converts signals from the satellite IF frequency to a terrestrial frequency between 250 and 730 MHz.
The TV channels which should be distributed in houses and residences, are processed in such a way that they can be used with existing coaxial cable networks without any limitations.
After the antenna outlet the signal is re-converted to the satellite frequency by a small device which could be mounted on the existing antenna socket. Now the channels could be received by using common standard satellite receivers as well as television set with integrated settop boxes, either HD or standard resolution. Several receivers can be connected to one antenna socket. Correspondingly, the conversion unit is available in two versions, the TST-C for using directly on the antenna outlet socket and the TST-B as a converter for a whole floor.

The PolySelect TST 1200 is the ideal replacement for analogue headends especially when the analogue signal reception is no more available. Apart from the advantage that the existing network structure can still be used, the TST 1200 from POLYTRON opens up more advantages: Compared to a digital terrestrial television signal, the digital satellite signal offers a considerably higher picture quality through a higher data rate. In comparison with similar QAM and COFDM transcoding solutions, the considerable cost savings can be up to three times. More than that the variety of DVB-C and DVB-T settop boxes is limited. Due to its compact form, the TST 1200 requires only half the space of a conventional headend. Further comparison with a headend shows not least a considerably lower energy requirement.

The TST 1200 converts up to 12 digital DVB-S or DVB-S2 transponders – including several TV and Radio channels – from the satellite signal frequency into the frequency range of 250 to 730 MHz. With the TST-C or the TST-B the signal is reconverted into the standard satellite IF frequency range of 1200 to 1680 MHz. The required power for the two converters is supplied by the connected satellite receiver.

For the retailer or the installer, the installation and operation of the TST 1200 is very easy in handling by either using the programming software on notebook or PC platform by USB connection, or manually using the integrated control panel. Simply choose the input signal for each of the 12 transponder, set the frequency of the desired transponder and, if necessary, adjust the level. No more special parameters for digital satellite signals are required. The TST 1200 has four inputs for satellite IF signals provided by one to four different satellites. They can be connected over internal multi switches to the respective converter. The self-installing software which is attached to the TST1200 base unit is also available on the POLYTRON website for download.

The TST 1200 converts 12 digital DVB-S / DVB-S2 transponders out of the SAT IF layer intothe frequency range of 250 to750 MHz.
Then the signals can be transmitted via existing, terrestrial(tree type) networks. The reconversion back into the SAT IF range of 1.200 to 1.700 MHz is done by an antenna socket adaptor in the residential unit. If a proper network exists, the reconversion back into SAT IF can be done for the whole floor, too.
By usage of a switching antenna socket adaptor the TST 1200 can be added to an existing single cable solution.
The TV programs can be watched using a satellite receiver or TV with integrated satellite receiver, no matter if SDTV or HDTV! 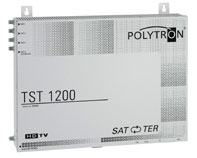